skip to main | skip to sidebar

Even as it was cold and raining, I was very happy just to reach the starting area yesterday, Monday, April 16, 2007, for the 111th Boston Marathon. Simply being there in Athletes Village, in the town of Hopkinton, walking around in the mud, represented thousands of miles of training, either alone or with friends, with many difficult miles but mostly pleasant.

The race went really well and was an incredible experience. Although there was a light steady wind in our faces most of the time, with occasional gusts, and at least two miles with rain, overall the weather was better than expected and I stayed strong for the whole 26.2 miles, picking up the pace for the second half. The crowds and the scenery and the huge numbers of accomplished dedicated runners around me were just incredible and inspiring. My final time of 3 hours 5 minutes 31 seconds (7 minutes 5 seconds a mile pace) was plenty good enough to qualify me for next year's Boston Marathon. Running is a major part of my life right now and just being able to participate in the Boston Marathon was very gratifying and exciting. It was my 4th marathon and each marathon seems to be slightly easier than the last but each has still been very difficult. Although sore, I am uninjured and feeling great.

Thank you, Jennifer, for making trade-offs and sacrifices that make my running possible. Thank you, Mom and Jess, for taking the time to go to Boston with me. Thank you, friends and family, for your well wishes and encouragement. And thanks to the hundreds or maybe even thousands of volunteers who made the Boston Marathon possible. And thanks to the tens of thousands of bystanders who cheered us on, especially those at Wellesley College!

Details
I spent the last few days in Boston and everywhere I went there were lean fit-looking people with Boston Marathon paraphenilia -- hats, goodie bags, and these cool jackets. It was really fun to be amongst so many dedicated accomplished friendly runners. On a bus to the Oakland Airport, I met a woman who had run 21 consecutive Boston Marathons! She was a high school math teacher, probably in her mid-50s. Inspiring! On the bus to the starting line I chatted with a guy who was 44 named Ron who was about to run his 7th Boston Marathon and he had lots of great advice. Here's a picture of the two of us: 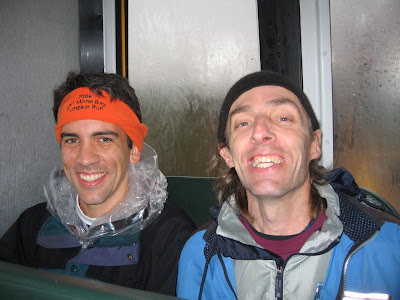 The weather predictions leading up to the race day were quite dire -- high winds were predicted to be blowing into our faces from the northeast, as the course headed in nearly a straight line from the town of Hopkinton to Copley Square in Boston. The temperature was predicted to be a chilly 34 to 39 degrees Fahrenheit. Rain was assured. I knew I could deal with the rain and the cold, but the wind would be exhausting! I made back-up plans with my mom and sister just in case I couldn't finish the race before they had to go to the airport.

Fortunately, shortly before 6am on race day, we saw the weather report indicate mild winds, little rain, and temperatures around 50 degrees. Excellent! I didn't hear my alarm but my mom woke me up at 5:50am yesterday morning. Oops! We were all packed and ready to go from the night before so it wasn't long before we were driving the rental car to Boston Common to get catch the buses to the starting line. 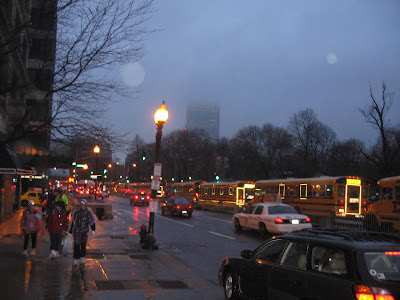 The bus ride there seemed to take forever -- like 45 minutes, traveling from near the finish area to the starting area. I tried not to think of how long 26.2 miles really is. As with most big problems, the first step to solving them is to break them up into manageable pieces. I break the marathon into various pieces -- taking a SUCCEED salt capsule every hour for the last two hours, eating an energy gel every 30 minutes, getting to the halfway point, warming up for the first 5 miles, getting to the one-mile-to-go point, etc. Racing 26.2 miles just seems too daunting unless it's broken up into little manageable pieces!

The rain was moderate in the Athlete's Village at what appeared to be a high school campus in Hopkinton. The ground was turning muddy and I tried to avoid getting mud caked all over my shoes. I searched for shelter in one of the big tents but they were nearly packed with runners. 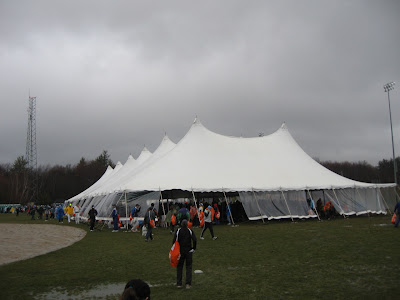 Finally, it was about 9:20am and time to put my excess clothes in a drop-bag, put on sunscreen, and get ready to run. I decided that it was likely to be warm enough to justify running without any warm clothes at all. For the race, I wore only my standard tank-top and shorts and running shoes. Based on the predicted weather, this turned worked out well. Everyone started shedding clothes after the first four or five miles and I was glad I didn't have to carry the additional weight of tying a jacket around my waist. 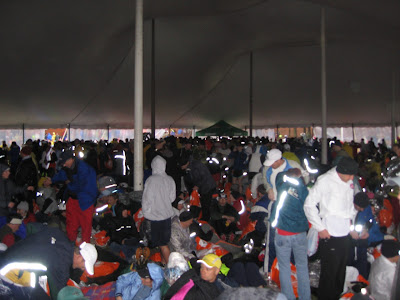 The Boston Marathon has the wheelchair athletes and elite women starting first, around 9:30am. Then the elite men and about the first half of the runners start at 10am in what they call Wave 1. Wave 2 started at 10:30am. Each wave was further divided into these big sections, about 100 feet long on the street, that is sorted by pace. These were called the "corrals" and had about 1,000 runners in each one. Our bib # determined our corral and I was in the 3rd corral (bib #3521). There are so many runners around my level that just a few minutes difference in qualifying time can put a person 2 corrals forwards or back. The guy I chatted with on the bus, Ron, qualified with a 3:12:00 time and he was two corrals behind me, with my qualifying time of 3:04:56. So just 7 minutes difference had at least a thousand runners in between us!

The time for starting came and we were off! There are so many runners evenly matched with me that I was surrounded the entire time, and the crowds seemed just as dense for blocks ahead, as far as I could see, and were even denser behind me, as the runners passed over the starting line. Quite a sight!

The rain seemed light now, for the first 1.5 miles or so. It rained again, lightly, for mile 14. The wind was light, but mostly constantly in our faces. Occasionally, there were big gusts or the wind temporarily was much stronger, and I tried to find someone to run behind.

The hills were noticeable and I could tell that my breathing and heart rate were rising, but they still seemed to be easy to handle thanks to all of my hill training.

A big highlight was mile 13, which is a downhill section in front of Wellesley College. I could hear the roar long before I reached the crest of the hill heading down next to the women's college. Many hundreds of the women were lined up along the road, many with their arms stretched out to high-five the runners. A few of the gals held signs like "Kiss Me 4 Luck"! I saw a guy in front of me grab a quick kiss but I stayed mostly focused on my running. They did make this mile very enjoyable and pass quickly by! Thank you, Wellesley College!

The first half of the marathon was soon done and I was feeling a bit fatigued and could start to feel my calves getting fatigued and not being too far from cramps. I took my SUCCEED salt capsule in order to help stave off cramps. The energy gel and the sports drink helped keep me going. I tried to pick up the pace a little bit but it seemed every time I did there would be either a hill or a gust of wind. I wanted to run faster than 7 minutes a mile, but had a hard time doing it while still feeling that I could keep up the effort until the end. It didn't help that my Polar Watch was once again not very accurate in measuring my pace. What's weird was that is was quite accurate for the first mile, reporting 0.99 miles at the 1 mile marker. But then it seemed to get much less accurate and report my pace as 6:40 or so when it was actually around 7:00. For the whole race, it reported 27.5 miles instead of 26.2. Oh, well, not really a big deal. Maybe the inaccuracy even made me conserve energy so that I could finish.

For this marathon, I never quite got to the point that I strongly felt like stopping. Even in Sacramento last December, when I ran the marathon faster in 3:04:56, I started to feel real fatigue after about mile 22 and it took seemingly a lot of determination to keep moving fast.

My sister Jessica and mom were going to try to see me finish, but I had told them that I expected to take about 3 and a half hours and maybe even longer. We even made contingency plans for what to do if I took up to 5 hours to finish and they had to leave for the airport without the rental car. The marathon organizers had a nice email alert system that could send text messages to phones, too, and I signed up my sister's cell phone. Unfortunately, she didn't realize that she had to scroll down to see the remainder of the message which gave the important info like what my predicted finishing time was. Anyway, they both missed the entire race and didn't see me running. They watched parts of the marathon on a television in a hotel lobby. Oh, well, it was still great having company. I would like to run this marathon again and hopefully next time it'll go smoother.

Here are my mile splits:

The Half Moon Bay Review wrote about me which is so funny because of how un-elite I am. I'm grateful for the write-up, but this quote cracks me up: "He finished less than one hour behind overall winner, Robert K. Cheruiyot of Kenya."